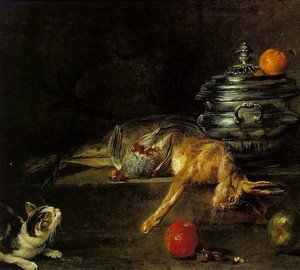 Silver tureen – Jean Baptiste Simeon Chardin. 1728. Oil on canvas. 76.2 x 108 cm
A careful flowerpot, a fragile jug, a side of an apple glistening in the sun … No, it’s not about Chardin. His still lifes are indescribably far from the usual awareness of this genre. This French painter was close in origin to the so-called third estate. The son of a carpenter, Charden from a young age learned to find beauty in the most ordinary and ordinary, and becoming a famous artist did not change his tastes. Faster, he changed the tastes of high society.

The canvas depicts a tureen of silver. And next to it lies very close to reality a written out stiff bunny and a shot bird – not the worst ingredients for soup. Colorful spots that take away the viewer’s attention are apples and pears. Despite the disarming naturalism, everything together is not without sympathy and even internal nobility.

The simplicity and ease of composition is essentially the result of accurate calculations and estimates of Chardin. He carefully thought out what his “genre scene” would look like (namely, this is how the painter called his canvases). As a result, the canvas looks like a frame of a certain art newsreel. Everything is easy and natural.

The picture is characterized by a rather dark color. That is why all the color spots look lighter more clearly and expressively. And the light brown hair of the killed rabbit, and the cat, and the mirror shine of the tureen. The rest of the master uses wood, brown and green colors – Chardin’s favorite palette.

The plot of the work is dynamic and unexpected oppositions. On the one hand, we see dead animals, hunting trophies, and on the other, a crouching cat, so active and funny. She crouched, ready to jump on the “goodies” seen in front of her. Life and death in the space of one picture. And all this revolves around a simple prosaic item – not very polished silver tureen."