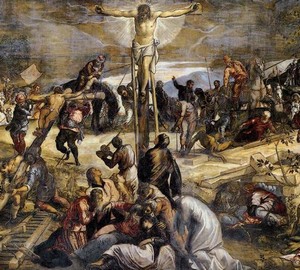 Crucifix – Tintoretto. 1565. Oil on canvas. 536 x 1224 cm
The multi-figured composition of this monumental canvas is one hundred percent subordinate to the architecture of the hall of the Abbey of St. Rock where it is located. Incoming people see the foundation of the cross with the crucified Rescuer, and he has a group of people immersed in grief from the loss of their beloved offspring, teacher and mentor. Moving forward, guests of the church see more characters from this large picture in size and scale.

At first, a cross with Jesus crucified grows before their eyes, and then a whole canvas opens in all its splendor. Two tall windows are located on the sides of the picture, so the canvas is illuminated by two strong light streams that create a game of colors and create the illusion of living figures.

It is impossible to estimate the scale of the image at once. Only upon careful examination, it becomes clear that the artist managed to create a kind of comic strip, fitting on the same canvas simultaneously the images of the scene of preparation for the crucifixion, the process itself and the final scene. With all this, the master involved many different characters – from the heartbroken family and the apostles, to the triumphant Jewish priests depicted in the distance, having got rid of a dangerous competitor. A group of people on horseback and in armor, characteristic of the Italian Renaissance, should depict Roman warriors led by Pontius Pilate.

The composition of the work is characteristic of the aesthetics of mannerism. These are extremely difficult poses and camera angles, many different characters, rich but restrained colors and subtle details. The center of the composition is the crucified Christ, surrounded by a bright radiance. His pale body and the rays of light emanating from him distinguish the image from all others, emphasizing the importance of what is happening. The remaining characters serve as a kind of extras, background for the central figure and the main event."