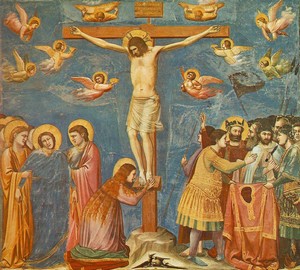 Crucifix – Giotto di Bondone. 1330. Wood board, tempera.
This picture of the great master, by virtue of his own plot, more than others recalls an icon traditional in image style. But Giotto, even in that one, a fairly standard type of icon, managed to bring dynamics and expression. At first, it found reflection in the dynamism of the figures depicted.

Although it may seem that there is no movement in the picture, it is worth a closer look. This wood board is like a typical instant photograph. She captured for centuries the moment of the highest passions.

In the center of the composition is Jesus Christ crucified on the cross. By his pale body hanging helplessly on the cross, it becomes clear that he is already dead. A pillow in a powerless frenzy of grief is embraced by a woman kneeling in a red cloak. This is Mary Magdalene, a faithful follower of Christ, later declared a harlot by the woman-hating church. Her very position and gesture reflects ultimate suffering.

The remaining characters of the picture are divided into two parts. On the one hand, a group of women who are called myrrh-bearing women in the Bible support the Mother of God, who is weakened by grief and incredible suffering. She hung helplessly on their hands, unable to cope with her emotions.

Another part of the picture is faithful supporters of Jesus Christ, his apostles. They stand in a close crowd looking at their leader and not believing in his death. Behind both groups of figures are visible images of Roman horsemen, almost mirror symmetrical. For the same purpose fluttering cherubs are depicted around the crucified Christ. They are also located symmetrically in a circle, which adds to the picture of the effect of movement.

For the image, the artist chose a light color scheme with a predominance of red and gold. Despite the tragedy of the moment depicted, this icon looks solemn and monumental."