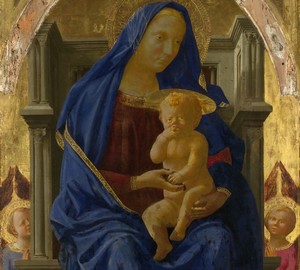 Madonna and Child – Masaccio. 1426. Wood species of poplar, tempera. 135.5 x 73 cm.
This religious image is made entirely in the spirit of the Renaissance. Despite the traditional interpretation of the plot, the image technique and its features make it possible to distinguish it among similar paintings.

It can be said that the canvas found reflection of the master’s zeal for symmetry and impeccable proportions. Apart from the most important central part, all other details of the picture are completely subordinate to the principles of symmetry. The foot and the powerful, expressive throne are a real architectural masterpiece, which looks very similar to a fragment of the building due to its structure and dark gray, “stone” color.

Sitting at the foot of the throne, small angels with musical instruments in mauve robes are almost symmetrical. They both hold the lute in their hands and sit, hanging their legs from the pedestal on which the throne stands, but one of them is deployed in three quarters, and the other looks in profile and holds the lute turned slightly at a different angle. This seemingly inconspicuous and discreet technique makes the composition more dynamic and effective, lively.

Behind the throne, on its sides, the figures of two seraphim are barely noticeable, which, too, at first glance seem symmetrical, but if you look closely, slight differences in postures become noticeable. The color of the clothes is also different – one has a pleasant bluish-purple shade of periwinkle, and the second has coral pink.

The ocher-gold background perfectly emphasizes the deep blue of the tunic thrown on the purple dress of the Madonna, and echoes the delicate skin tone of the chubby baby Christ. A classic blue tunic is bordered by an expressive golden stripe, which not only emphasizes the color itself, but also helps to add volume to the figure, fitting into a complex pattern of folds.

As usual with Masaccio, the deep expressive folds of clothing do not conceal or flatten the body, but emphasize its lively, voluminous forms. For all the apparent saturation of the colors used, the overall impression of the picture is harmonious and pleasant, because the artist masterfully observes the proportions and inclusion of bright colors to avoid variegation.

The master did not miss a single opportunity to make his work as expressive as possible without the variegation and fragmentation of the form. On the pedestal, an ornament is neatly spelled out, which is distinguished by the symmetry and simplicity of the picture, but, nevertheless, making this rather big detail visually easier. The same applies to the throne – its massiveness is softened by small outlets and narrow columns. Stylized sockets are a reference to the rose, the symbol of the Virgin Mary.

A beautiful play of color, light and shadow successfully creates volume in this picture, which is very difficult to expect lightness from due to the specifics of the image. Nevertheless, the picture differs sharply from typical Gothic “flat” canvases, the authors of which did not even try to go beyond the usual two-dimensionality of space. Here, there are clearly innovative ideas that made Masaccio one of the best and most gifted artists of the early Renaissance."