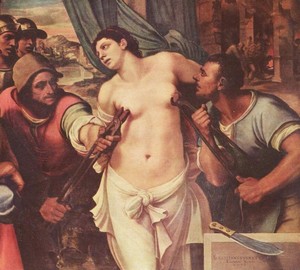 Martyrdom of St. Agatha – Sebastiano del Piombo. 1520. Oil on canvas. 127 x 178 cm.
Saint Agatha is one of the most revered martyrs in Catholicism and Orthodoxy during the period of active persecution of Christians by the Romans. She was born in Sicily in a comfortable family, but early believed in Christ. Agatha was interested in the local prefect, but refused him. As a result, the lady was sent to a public house, and then tortured for a long time with the special ruthlessness characteristic of the Romans in the fight against dissent. She had her breasts cut off and then burned at the stake.

The painting del Piombo captures the moment of torment of the saint. The creator depicted a half-naked young lady, whose delicate nipples are tormented by tremendous ticks. The saint is surrounded by rude and cruel men. Looking at her, soldiers and executioners are perplexed by the fact that she does not scream or pray for mercy.

The canvas, despite its theme, is made in the rich “Venetian” color scheme typical of the artist during this period of his work. Agatha is tied to a pillar richly decorated with fabric, and behind her you can see how the Romans drag a resisting Christian into the arena. The landscape in the background of the canvas clearly does not belong to the Roman, but to the medieval city, as indicated by the characteristic architecture. The same can be said about the clothes of the characters. Despite the fact that two warriors wear helmets and clothes, the helmets themselves belong to a completely non-Roman era. They date back to the time of painting, although they are a bit stylized as old forms.

As is characteristic of the master, the painting used a complex composition, composed of several figures in different poses. Thanks to this arrangement of characters, the artist manages to avoid the static image, to give him the necessary dynamics and expressiveness. As a result of using a well-thought-out composition, rich color gamut and undoubted skill of the artist, a magnificent picture was obtained."