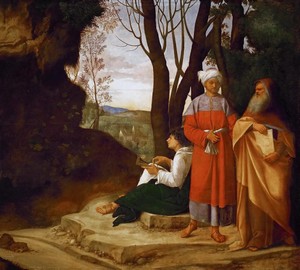 The three philosophers are Giorgione. Around 1505-1509. Canvas, oil. 123 x 144 cm
A year before his own catastrophic death from the plague, Giorgione painted a picture "Three philosophers", which has become the subject of philosophical and religious reflection and quest. It is clear that the canvas was ordered from the creator by the mercenaries Tadeo Contarini. Finished the work of another painter, a student of Giorgione, the Venetian Sebastiano del Piombo. All other information about the work is provided by detailed research and analysis.

We see three guys of different ages – completely young, sitting on a stone; middle-aged, who holds his hand on his belt and old with a small scroll in his hand. There are several conceptual versions that these three philosophers personify:

The interpretation that looks most logical is when three philosophers are compared with a certain allegory of continuity: the old philosopher, perhaps Plato or Aristotle, as representatives of the ancient Greek culture, pass on their knowledge to a young man who personifies the young Italian Renaissance, but do it through the Arabic "stage" civilization, which represents a middle-aged hero (possibly Ibn Rushda or Avicenna).

We can not say about the surrounding landscape of the picture, because it is always very important in the paintings of Giorgione. In the background, the outlines of the village are guessed, even further – a mountain, executed in an unexpected blue color. The near plan is also rich. Here you can see the rocky ledges under the feet of philosophers, bare tree trunks, special sunlight. All the action takes place against the backdrop of a black cave, preserving the unknown. It is known that Plato connected human consciousness with a dark cave. Like prisoners of a cave, people believe that they comprehend the world through the senses, with all this the essence of things is not revealed to them.

The masterful use of color makes the picture even more expressive and compositionally verified. With our eyes, as if we are moving along "the route"which Giorgione asked us 500 years ago: from the bright red, gold, white clothes of the heroes to the mysterious darkness of the cave and deep into the picture, where the mountain is intriguingly blue.

Theologians of old times interpreted the picture as a biblical plot – three magi came to the cave where Christ was born. Today’s more "secular" the way of thinking, coupled with careful research of the picture, make this theory untenable."