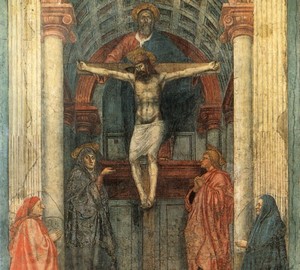 Trinity – Masaccio. 1427. The fresco.
This image of the crucifix, a theme very widespread in church art, is made in an unusual, non-canonical form. The fresco makes the illusion of a large building piece, made in a very unusual style for the Gothic style. This is a real Renaissance with its subtle understanding of the proportions and role of perspective in art.

The lower part of the fresco depicts a stone gravestone belonging to Domenico Lenzi. This fact gives the right to assume that two figures – male and female, located symmetrically above the tombstone, belong to the persons who paid for the fresco – Lorenzo Lenzi and his wife.

The central part of the symmetrical composition is, in fact, the scene of the crucifixion. The cross depicts Christ, behind whom God the Father stands, supporting his son at his death hour. On the sides of the sad group are the figures of the Virgin Mary and St. John. Interestingly, the Virgin Mary turns to face the audience and reaches out to her son suffering on the cross, seemingly saying: “Look at what Christ went for your sake.”

The fresco is distinguished not only by a surprisingly correct depiction of perspective, but also by a very accurate transmission of many architectural details. Because this is a fresco (painting on raw plaster), it can be assumed that the master himself had an amazing speed of writing and fantastic working capacity so that the whole picture was executed in such a high quality and impressive way.

Despite the fact that the image has many details of red color, the features of the fresco and the time spent by it somewhat smoothed out the saturation of the color, made it softer and more natural. The craftsmanship, incredible for the time of creation of the work, surprisingly accurately and correctly conveys the impression of a person standing in front of a large architectural portal. A complete illusion of the real building is created, because the fresco perfectly depicts space, air.

In addition to the magnificent execution of the smallest architectural details, the fresco impresses with the elaboration of the folds of the garments of the depicted figures. For all their volume, they all perfectly outline the outlines of the bodies of people, therefore they do not seem like foreign fragments, as often happened in other images typical of Gothic art. Truly, with the untimely death of a talented artist, the world has definitely lost another Renaissance titan."