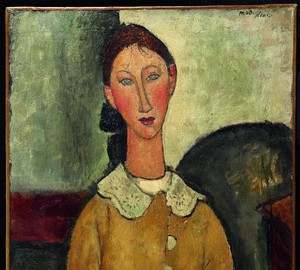 A woman in a yellow dress – Amedeo Modigliani. 1917. Oil on canvas. 92 x 60 cm
Amedeo Modigliani – first, an outstanding portrait painter. People, and most importantly, faces, heads, were most interested in the Italian painter. Why? The master himself answered this question, repeatedly repeating that he considers human faces to be the best of what nature has done.

A young woman in a yellow dress appeared two years before the death of Modigliani. In stylistic terms, the portrait does not differ practically from other works: a long neck, an elongated face, a bright vibrant blush, a thin nose, pinched, small lips. The only thing to note is that the girl’s eyes are written out. It is known that most portraits have “empty” or covered eyes, and the heroine from this work looks at the world calmly and confidently. Although her gaze does not differ in accentuation and detailed drawing – Modigliani seemed to have marked the pupils, leaving them rather faded, slightly tinted with light blue.

Thanks to the filmmakers, it was widely believed that the artist paints the eyes of his heroes only in this case, if he recognized their soul. If you take this on faith, then the soul of a girl in a yellow dress was not a secret for Modigliani. Although we do not know exactly who the heroine of the portrait was.

The master placed his heroine in the corner – Modigliani beat this compositional technique a couple of times. The walls behind the portrait are painted in different shades. The girl is sitting on the couch in a strict, slightly tense pose. Hands folded on his knees. Some asymmetry is noticeable in the clothes, which can be read by looking at the white lace collar and buttons on the chest.

Modigliani did not seek real resemblance; rather, he tried to grasp the essence of man. The artist’s gaze is rather ruthless and uncompromising – it either smoothed or sharpened certain features, trying to convey the soul of the model in the form in which he himself had seen.

Is it possible to read a person from the portraits that Modigliani painted? To do this, of course, is not easy, but the gaze of the viewer will be able to catch a lot, if not the main thing. The girl before us is calm and serious. Clasped hands tell us about humility, but steadfast character. Glance pensive, deepened in himself. Most likely, our heroine is smart and complaisant. Her image reads self-esteem and at the same time feminine gentleness.

Portraits of Modigliani are among the most expensive works of art, and the vast majority, like the work presented, found their “permanent residence” in private collections."