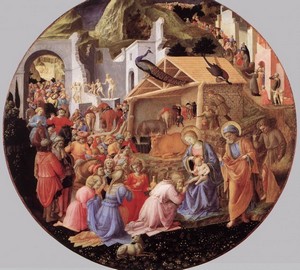 Adoration of the Magi – Fra Filippo Lippi and Fra Beato Angelico. Around 1440-1460. Wood, tempera. Cross section 137.3
Two monk artists worked on this tondo, and although researchers believe that most of the painting was painted by Fra Filippo Lippi, the influence of Fra Angelico is obvious here, and in some places his hand is easy to find.

“Adoration of the Magi” considered one of the best works of the Florentine school and peculiarly sums up the result of Italian art of the first half of the XV century. The colorful and cheerful painting of the Middle Ages is combined here with a new style based on the study of anatomy and perspective. Colorful outfits worshiping the newborn Savior and their almost all theatrical poses are combined with a different vision of space and the arrangement of compositional plans. The accurate construction of the bodies of naked young men watching the procession testifies to the interest of the authors in anatomy, which will soon take over the minds of other Italian masters and culminate in the ceiling painting of the Sistine Chapel by Michelangelo.

The presented painting influenced the Florentine painting, many subsequent works have explicit or hidden references to this work. An interesting entry was found in the inventory of the Medici collection, made in 1492, after the death of Lorenzo the Magnificent. 100 florins were paid for the tondo – a huge amount."