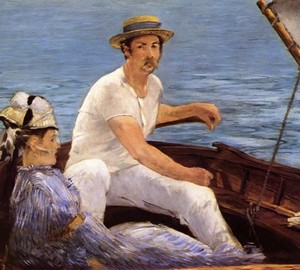 In the boat – Eduard Manet. 1874. Oil on canvas. 97.2x1Z0.2
The painting was painted in the summer of 1874 in Argenteuil, a small resort town located northeast of Paris on the banks of the Seine and chosen by metropolitan people who like to spend pleasant hours on the water. It was here, where the impressionists preferred to paint in the open air, Manet worked next to Renoir and Monet. Meeting with these painters in almost everything determined the choice of bright catchy coloring of the canvas and an acceptable impressionist theme – the joy of the middle Paris bourgeoisie.

The man depicted is brother-in-law of the artist Rudolf Lenhoff; the woman’s identity has not been established. The scene is viewed from a very high point, which turns the water into a kind of blue wall, reminiscent of a stage backdrop deprived of depth, vertically growing behind the figures. A similar technique can be traced in Japanese engravings, a great interest in which has always been shown, like many impressionists, by Claude Monet. On this canvas, the French artist departs from the dark colors drawn from Spanish painting, turning to a brighter color scheme based on white, blue and brown tones."