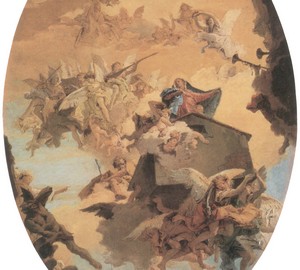 The complexity of the work was that the artist needed to place a sketch in a narrow, rounded place between the murals of the Mangozza Colonna, a famous quadurist (quadurists are painters who performed ghostly building compositions on a plane using colorful means). Creating the effect of the vertical depth of a heavenly place, Tiepolo divides the image into registers, emphasizing the density of characters in the lower one and very brightening, visually lightening, the upper plan with hardly outlined exquisite graphics. According to legend, Saint Helen, the mother of Emperor Constantine, erected a church over Mary’s house in Nazareth, where Gabriel appeared with the divine tidings to the young Virgin. At the end of the 13th century, when the Turkish threat arose, the three walls of the building were transferred to the town of Loreto in the papal possessions by members of the Angels family that controlled Epirus, under whose protectorate Nazareth was located. The legend “adapted” the name of the rulers and reports that the angels moved the house and lowered it into the laurel grove of a town in the north of the Adriatic."