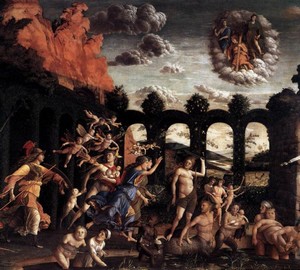 Pallas, expelling vices from the garden of virtues – Andrea Mantegna. C. 1499-1502
Mantegna wrote this painting (c. 1499-1502) for the Duchess of Mantua, likening it to Minerva (Athena). In the picture Pallas runs in, dispersing everyone on his own path and looking towards the sky, where Moderation, Justice and Persistence soar in the clouds. Behind her, a female figure is transformed into a tree entwined with a scroll asking Virtues to punish Vices. On the right, Ingratitude and over-breasted Greed are dragged by flabby Ignorance, followed by a satyr and a centaur, on which a naked lady embodies sensual love. A little bear with bags of evil symbolizes Indomitable Hatred, Anger and Deceit, and Sloth leads an armless Idleness on a rope. Ladies in blue and greenish vestments next to Pallas can mean Diana and Chastity.

THE BATTLE OF THE VIRTUES AND FAULTS. Opposing vices and virtues are often shown fighting, for example, Faith with Idolatry, Modesty with Pride, and Chastity with Lust, or they are placed opposite each other in niches, as, for example, in the cycle of Giotto’s narrative frescoes. Since the Renaissance, Minerva, Apollo, Diana and Mercury have always been on the side of Virtues, and Venus and Cupid are on the side of Vices."