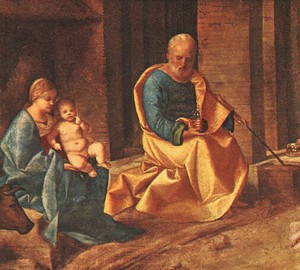 Adoration of the Magi – Giorgione. 1500-1510. Wood, oil. 29 x 81 cm
The picture of Giorgione "Adoration of the Magi" they love to associate with his other work – "Adoration of the Shepherds". It is believed that both were written in 1505, when the painter was just starting his own independent career. The master’s not yet strengthened hand is still visible, but the personal manner is firmly read, although some traits of imitation to his venerable teachers can be noted.

The Adoration of the Magi is one of the most beloved stories on the biblical theme. We find paintings with such a title in Leonardo, Rembrandt, Dürer, Bosch, Brueghel, Botticelli and others. Magi, led by a star, came to Jerusalem to see the newly born King of Judea, which alarmed King Herod (who later made known "beating babies") And they found Mary with Jesus in Bethlehem. The moment of worship of the Magi the baby can be seen in the picture of Giorgione.

Mary sits on stones, holding Christ on her lap. On the right side there is a group of wise men – there are 12. Someone knelt, someone else was messing with horses, others were standing aside. The sketch is rather fragmented, the color lacks rigidity, however, the artist is interested in the inner world of each of the heroes. It seems that they are by no means combined together, even compositionally, it seems that everyone exists within the framework of the picture on its own. This is one of the hallmarks of Giorgione’s work – sometimes it is very difficult to grasp the relationship between his characters. Although each separately can be considered endlessly. The artist endowed everyone with his character, habits, and dynamics. This is a gallery of images, interesting and filled.

It is noticeable that the painter in the presented work adhered to iconographic canons, although not without individual freedom. You can see how big the newborn Jesus seems to be in Mary’s arms. The drapery of the fabrics on the heroes was done in a sketch, without detailing and nuance, although diligent work on chiaroscuro can be noted.

"Adoration of the Magi" significantly different from other works by Giorgione. Here we do not see the landscape, which in the remaining works “leads its own party”, which is in consonance with the characters. The whole canvas is filled with figures of people. This fact has raised doubts among art historians – is this painting exactly Giorgione? There is no definite answer to this question, but the generally accepted version confirms the affiliation of the painting by Giorgione. All the “inconsistencies” are explained by youth and the desire to imitate Bellini and Carpaccio."