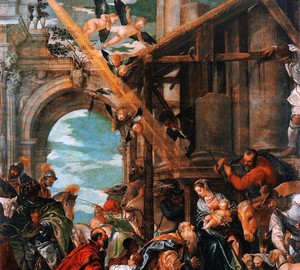 Adoration of the Magi – Paolo Veronese. 1573. Oil on canvas. Z55.6hZ20
Three magi who came from the East, following the guiding star, found Mary and the Kid in Bethlehem. In the Renaissance, painters and Veronese, namely, often painted the house in which the Virgin Mary gave birth. This house looks like a dilapidated building and symbolizes the Old Testament. Well, Christ appeared on earth to exchange it for the New Testament. The picture shows that this “house” is attached to the ruins of a stately structure in the classical style with a triumphal arch in the background – an indication of Rome. In the foreground are the magi with their retinue. In addition to the gospel characters, Veronese, as usual, introduces many other participants into the scene, transforming in his own style the sublime act of worshiping the Infant (in other words, recognizing His Divine nature) into a magnificent celebration.

The diagonal that dominates in the picture, which is formed by a stream of light pouring from heaven with figures of angels on it, “responds” to another, drawn at right angles to this ray – from the figures of the Magi. Madonna and Child are at the intersection of lines – a wonderful and unique compositional solution!

The work is dated, Roman numerals are displayed on the bottom step of the stairs (bottom right). It was written for the church of San Silvestro in Venice and remained there until it was rebuilt in the 19th century. “Adoration of the Magi” – this is not an altar image, the picture hung on the wall of the nave next to the altar of the brotherhood of St. Joseph."