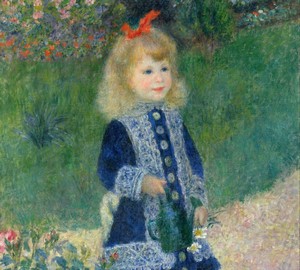 Girl with a watering can – Pierre-Auguste Renoir. 1876. Oil on canvas. 100×215; 73
For his own career Renoir wrote a lot of paintings, where the main role was given to girls. It’s enough to recall the portraits of Romain Laco and Mademoiselle Legrand, the paintings “Walk”, “Girl with Jumping Rings”, “Pink and Blue”, etc. However, this work is striking in its spontaneity and in the absence of any instinctiveness, which would, without any doubt, steal this immediacy and charm of momentary.

The picture resembles a randomly executed photograph – the girl does not even look at the viewer, enthusiastically looking at something in the distance, holding a watering can in her hands, which almost merges with her bright outfit.

Today it is impossible to say with accuracy what kind of heroine this is. Most likely, Renoir himself did not know her name, because otherwise he would have indicated it in the name of the picture, as he did in previous works. Art historians generally believe that this is a random girl, snatched by the painter’s attentive gaze, perhaps his neighbor.

The technique in which the painting is executed testifies to the late period of impressionism. Small strokes turn the space into a texture that is complexly woven from the smallest shades, sparkling and expressive. Smooth halftone transitions completely eliminates any hint of a contour or a clear line of the picture. Renoir considered color a self-sufficient tool for creating paintings, and “Girl with a Watering Can” is another confirmation of this."