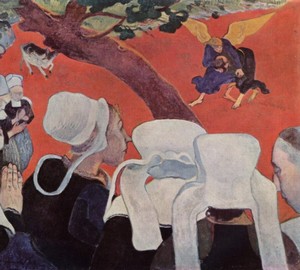 Vision after the Sermon (James’s Struggle with the Angel) – Paul Gauguin. 1888
The mysterious masterpiece of Gauguin, which depicts breton religious party, It was written in the fall of 1888. The theme of the vision was the struggle of Jacob with an angel, described in Genesis. On the frontal plane, on the left and on the right, the praying woman and the priest, bowing their heads, are depicted with their eyes closed, which indicates their deepest inner perception of the vision. Jacob’s fight with an angel was interpreted differently by French writers and painters of the 19th century, who saw in it an allegory of the struggle for the separation of religion from the country and the growth of religious fluctuations or the relationship of the human race to the divine. The interpretation of Gauguin reflects his idea of ​​the mystical understanding of the artist acquired at the cost of great efforts, unattainable for ordinary people.

JACOB. In the Old Testament, the twins Jacob and Esau were sons of Isaac and Rebekah. In one episode, at night by the stream, Jacob fought with an angel before dawn. Unable to defeat Jacob, the angel did not give his name, but told Jacob that Israel would henceforth be his name. Then Jacob realized that he was fighting with God."