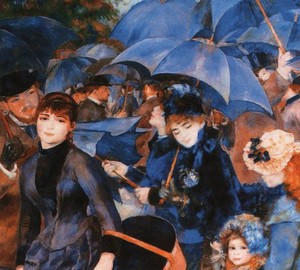 Echoing crowded Parisian street. The rain. Lots of umbrellas. The original thought: to convey the hustle and bustle and, as usual with Renoir, French and even purely Parisian charm and charm (the master is far from psychologism) through the accumulation and crush of … umbrellas. The artist takes the idea to capture a brief moment, momentary event. For this, it seems, nothing is needed – neither to build a scene, nor to take care of the actions and interactions of the characters. It is only necessary to seize the moment. The painting embodies the ideal of the aspirations of two arts – painting and photography: from the first – spirituality of perception, from the last – “instantness” (the artist even cuts off the figures on the sides, as happens in photographs).

But with all the “instantness” of the event, the canvas itself was not written at once (judging by the date of creation). Renoir turned to him twice during his career. He began it as a “pure” impressionist, but soon began to feel disappointment in this style. The painter was greatly influenced by the trip to Italy, as a result of which he turned to older artistic methods, namely the art of Jean Auguste Ingres, a distinct outline of the figures appeared in the paintings. Returning a couple of years to this work, Renoir rewrote the figure on the left.

The rapid changes taking place in the French fashion allowed researchers to date the painting – the second appeal of the master to it took place in 1886."