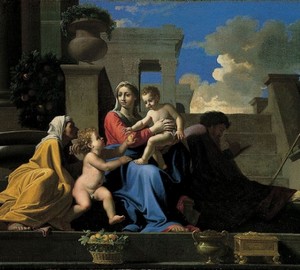 The holy family on the stairs is Nicolas Poussin. 1648. Oil on canvas. 68,7×97,8
Nicolas Poussin was inspired by antiquity, the art of Raphael and Titian. With his works, he tried to bring traditional, strict restraint, spotless, gaping light into the prevailing ceremonial Baroque style.

The holy family is located on the stairs, which is unreal, it exists in another, alien space, and the images exude harmony and measured, contemplative beauty. At the very center of the composition is an emphasis on the apple, extended to the Baby Jesus by little John. Mary holds the Offspring, immediately showing and protecting Him, she is a sacred support and barrier. Christ reaches for his cousin, John the Baptist, whose mother, St. Elizabeth, sees Him. The figure of the Madonna is balanced by Saint Joseph sitting in the shade, a bright sow falls only on the foot of his straightened leg.

There are many allegorical elements in the picture, which at first glance seem random: the fruit basket presented to the Holy Family symbolizes earthly fertility, orange trees – atonement of sins and the beginning of a new life. Next to St. Joseph – a classic vase – a reminder of ancient Greece and a casket that symbolizes the gifts of the Eastern Magi. It seems that the picture rises up. This impression is created thanks to the persistent verticals and underlined horizontal lines of stone steps – from the first to the columns and balustrades of the portico, open to the endless sky."