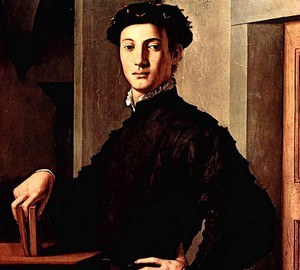 Portrait of a young man – Agnolo Bronzino. 1530s Wood, oil. 95.6×74.9
The representative of mannerism, the court portrait painter of the Medici barons, Agnolo Bronzino, apparently depicted in the picture of the urban baron Guidobaldo II or the first of the members of the Florentine art circle, where the author went. The young man stands with a “steel” posture, putting a thin hand on his belt. The artist emphasized that this is a man proud of his aristocracy. The severity and even rigidity of the pose depicted is enhanced by clear architectural structures in the background.

The young man holds a book in his hand, symbolizing not only his education. Bronzino and his companions were fond of poetry, composed verses, and the volume of poems, which the young man laid with his finger, hinted at an activity elevating the soul. Therefore, not everything is so simple in this “arrogant” aristocrat. The only thing we will never know is on which poem the book is ajar. This mystery enlivens the strict and magnificent painting of the work."