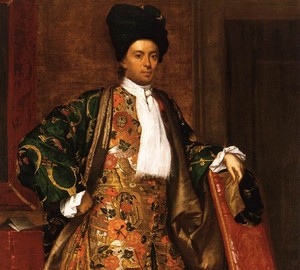 Portrait of Count Giovanni Baptiste Vailletti – Fra Galgario. Around 1710. Oil on canvas. 226×137
The true name of the artist who took over the craft of his father is Giuseppe Gislandi (1655-1743). From his native Bergamo, a twenty-three-year-old painter arrived in Venice. Severe mastery classes taught him Sebastiano Bombelli, the official portrait painter of the city nobility. It was thanks to him that Galgario received not only a circle of customers capturing the patricians, but during his stay in Lombardy and the Milan aristocracy, and he adopted the art of depicting a spectacular gesture, a wonderful ceremonial colorism, especially in the interpretation of costumes. In Venice, he received tonsure at the monastery of St. Francis (“fra” – “brother”), and returning to his homeland in 1702 he entered the monastery in Galgario. The asceticism of his life became the reason for the choice in the main of male models in which he always found acutely individual features, having created, thus, a gallery of representatives of the Enlightenment.

The craftsmanship with which the burning brightness of the colors of the grandee’s luxuriously embroidered robes is conveyed, the calm dignity of the count’s posture and the restrained energy of his gaze make “Portrait of Count Giovanni Baptiste Vailletti” a masterpiece of world painting."