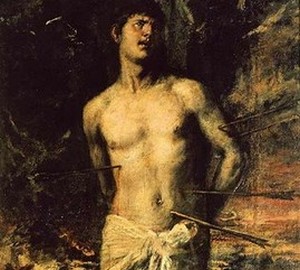 Saint Sebastian – Titian Vecellio. Around 1570. Oil on canvas. 210×115.5
Most of the works of the great 16th-century Venetian artist Titian (1488 / 1490-1576), stored in the Hermitage, belong to the late period of the master’s work. His talent did not fade with age, but acquired a new depth and perfection of performance.

“Saint Sebastian” – one of the best works of the painter. Titian Sebastian – a proud Christian martyr who, according to legend, was shot from a bow by order of the emperor Diocletian for refusing to worship pagan idols. Sebastian’s powerful body is the embodiment of strength and rebellion; his look does not express physical torment, but a proud challenge to tormentors. Titian achieved a unique effect of flickering color, not only using a color palette, but also using the texture of paints, the relief of strokes. According to contemporaries, in recent years, Titian wrote not only with his brush, but also with his fingers, sculpted, creating from the combination of light, shadow and tonal transitions that vivid impression of the paintings that so delighted the audience."