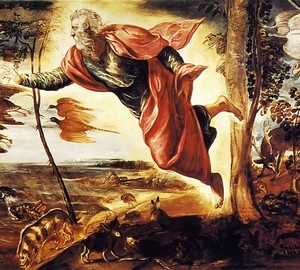 The Creation of Animals – Jacopo Tintoretto. 1550. Oil on canvas. 151×258
Tintoretto cooperated in his own work with Venetian colorism and Florentine-Roman plasticism. But his painting is a unique phenomenon thanks to theatrical and stage effects, unusual compositional solutions, including sudden camera angles, and a free manner of writing, in which a special expressive language was created.

Tintoretto’s compositional solution is borrowed from the Titian canvas “Bacchus and Ariadne.” There is almost the same landscape in the background, but in contrast to the work of Titian, the heavenly vault, along which the flying figure of the Creator, shrouded in a golden glow, is still immersed in twilight. Birds quickly rush out from under his hands, small animals just born of divine will “crowd” on the earth, and large animals follow him, even a unicorn among them. As a true resident of the maritime republic, Tintoretto paid special attention to fish, drawing them so that it is possible to identify different species.

For the first time in many centuries, curators used the picture for display in the context of contemporary art. This happened at the Venice Biennale in 2011. It would not be an exaggeration to say that Tintoretto’s canvas became the highlight of a huge exhibition dedicated to the most pressing phenomena of contemporary art!"