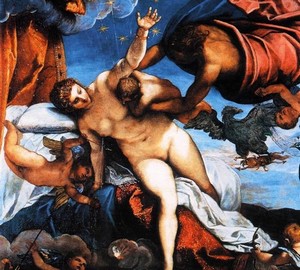 The origin of the Milky Way is Jacopo (Robusti) Tintoretto. Around 1575. Oil on canvas. 149.4×168
Jacopo Tintoretto – the great painter of the Venetian school of the Late Renaissance.

The work was commissioned by the ruler of the Holy Roman Empire, Rudolph II, to decorate his Prague residence. This is one of the best paintings by the master on a plot from ancient mythology. Another title for this story is “Hercules Moral”.

In the picture, delightful for its colorful pluses, a huge number of characters and details that have allegorical and symbolic meaning. In the lower part – cupids, they hold arrows and a lit torch – attributes of fiery love. The net in the hands of the right cupid, apparently, hints at the deception that Jupiter resorted to in order to immortalize his son. The eagle, a majestic bird hovering near the god, was considered his messenger, and sometimes even personified him. He holds in his claws an object that looks like a two-pointed fork, symbolizing a bunch of flames of flame. This is an attempt by the author to portray lightning, a sign of the Thunderer. On the right is a pair of peacocks, they traditionally accompany Juno, the goddess of heaven and patroness of marriage."