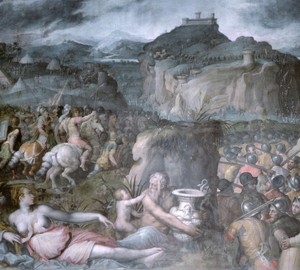 The Siege of San Leo – Giorgio Vasari. 1556-1560
A large multi-figure composition, usual for painting mannerism in the interpretation of Vasari, as usual, is filled with countless symbolic figures and views. The very image of the castle on Mount Montefeltro, which for many centuries was considered impregnable, is fanned by legends, because it appeared on the site of an ancient Roman temple and even 2 years was the capital of Italy in the X century. It was in this impressive castle that the magnificent Giuseppe Cagliostro died.

The canvas depicts the moment of the siege of the fortress in 1516 by the troops of Florence, led by Antonio Ricasoli. Actions unfold on a wide panoramic background. The entire background of the canvas is a distant mountainous landscape of the border of two provinces – Emilia-Romagna and Marche. Numerous castles are visible in the distance, and in the center on a rocky peak with steep slopes stands a stronghold – the castle of San Leo. He is surrounded on all sides by suitable Florentine troops – foot soldiers with huge flags and horsemen in spectacular spectacular outfits and armor.

The foreground figures are of interest. This is a middle-aged gray-haired man with a huge curly jug, a naked young child standing next to him and a young woman lying to her full height. Unlike soldiers fully dressed in modern fashion artist, this group is half-naked, except for light colored draperies, as in ancient times.

The picture is interesting by careful study of details, numerous figures and details of the landscape, a pleasant rich, but not variegated color scheme."