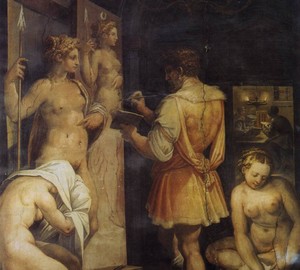 Artist Studio – Giorgio Vasari. 1563. The fresco.
The fresco by Giorgio Vasari “Artist’s Studio” appeared in 1563, and gives an idea (albeit very poeticized and personal) of how the workshop of the 16th century painter looked.

Three figures of nude models and a broad-shouldered figure of the artist, with their backs turned to the viewer, stand out from the twilight. In the depths of the fresco you can see the open doorway, where three more guys are located. Maybe these are artist’s students. At the time of Vasari, very often famous painters instructed their students to finish certain elements on canvases. This practice was widespread, but the authors did not deserve authorship / co-authorship. It is clear that Vasari himself very often resorted to the help of his “wards,” for which today’s critics do not tire of reproaching the first art historian in history.

The brightest of the sitters is just at work – she poses for the artist in the image of the ancient Greek goddess. Most likely, this is Athena, as evidenced by a characteristic spear in his hand and a hat. The other two girls are busy with their affairs, either preparing for the session, or already resting from work.

The exposition, nude figures and their poses, non-standard lighting solutions and compositional structures are vivid markers of mannerism, the style that followed the Renaissance and was characterized by subjectivity and crisis phenomena in the moral and religious sphere."