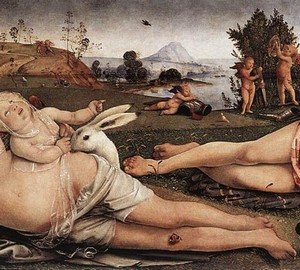 Venus, Mars and Cupid – Piero di Cosimo. Around 1505. Oil on wood. 72 x 182 cm
The work has the usual horizontal angle selection and was created by the master himself for storage in his personal collection. The work was written for a long time and was done entirely in oil on canvas. Several times the picture was lost sight of, but was again found after the Second World War. That’s when she got to the Berlin art gallery, where she is now in time.

The picture was painted a couple of years in a row, but along with it, the author worked on other projects too. If Pierrot were only involved in writing one picture, and then, not on a commercial basis, he would not be able to maintain the standard of living that he led in those days. The man had his own studio, several simultaneous biological experiments. All this required a lot of financial investments, which an artist would not be able to pull without a source of income.

The painting was done in a soft, not finished style. It is called because each brush pressure is cut off in the middle, so that the color looks bright from the side. The paints were distributed in a large layer and just when the picture was dry, it was necessary to constantly drive flies away from it. At that time, paints were made according to a different formula, and that’s why insects really wanted to feast on them.

The picture was drawn in three stages. First, two central figures were drawn. Visually, they immediately attract the attention of the public, and were specially drawn using soft, cold colors.

The second step was to create the fields behind them. If you look closely, the figures are not so detailed. The edge stroke disappeared, only the painted emotions of the face remained.

The third step is the creation of heaven and mountains, behind the rest of the plan."