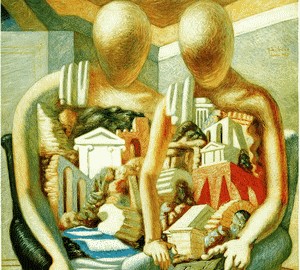 The archaeological cycle of paintings by Giorgio de Chirico. 1927-1928

In the years 1927-1928, de Chirico addressed the topic of archeology more than once. Coinciding with "gladiatorial" cycle cycle "archaeological" also appeals to theatricality and spectacular display of reality. Heroes – two seated in a mannequin chairs. Dressed in togas, they keep on their knees models of excavation sites and archaeological discoveries. The legs of both metaphorical archaeologists are carved from marble, as are the building monuments on their lap. It seems that the figures frozen in stillness evenly become ancient sculptures themselves. The painter depersonalized his own heroes. Instead of cheerfully looking at the discoveries, de Chirico preferred to show the material results of the excavations …

All items are in a confined space. The viewer’s gaze is initially focused on the wall in the background, later it seems to be reflected from it and rests on two mannequins together with a collection of Greek and Roman archaeological finds. Contrasting colors – white and black – of two armchairs, a semicircular contour of the hands of archaeologists bring a glance to the center of the picture – a heap of antique buildings. The artist’s goal is to sing these ancient ruins, which served as a source of his inspiration for many long years. Andrea de Chirico has repeatedly noted that Ancient Greece and archeology are authentic elements necessary for the existential balance of his brother-artist.

Archaeologist in the Temple – de Chirico

IN "Archaeologist in the temple" de Chirico focuses on the architectural elements of the rooms. In the left part of the work it is possible again (as in "Metaphysical interiors") see a variety of measuring instruments – squares, rulers and compasses. The main character of the picture (and it is the female figure that is now depicted) froze in an elegant pose – the left hand rests on a reduced fragment of the antique structure, and the faceless head leans toward it melancholy. It seems that the female archaeologist deifies her work, likens it to sacred tinning, and, being in the excavations, behaves as if in a temple. However, this temple for a real archaeologist is a native home. Like archeology itself for the artist Giorgio de Chirico, who is in love with her …"