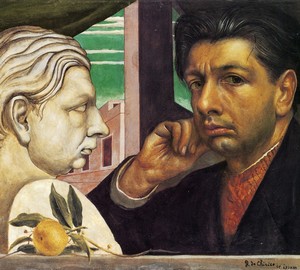 De Chirico is constantly studying his own image. To do this, he experiments with poses, facial expressions, changes clothes, examines his face.

The 3 most recognizable self-portraits of Giorgio de Chirico 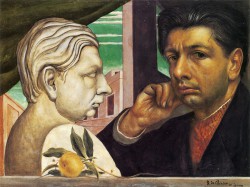 "Self portrait" 1922 standard It bears the undeniable impact of the iconography of the Italian Renaissance, and the character profile makes you recall the canons of ancient art. There is also the artist’s beloved technique of doubling the image. Giving its features to the marble bust, de Chirico continues the dialogue with antiquity. 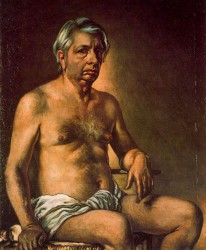 De Chirico – "Self portrait" 1945
On a self portrait in 1945 we see the almost naked de Chirico sitting in a natural, not staged pose. The painter depicts himself in the spirit of an ancient tradition – he appears in front of the viewer in the guise of the Greek philosopher Diogenes.

"Self portrait in the garden" – de Chirico

On the "Self portrait in the garden" the artist presented himself in a 17th-century costume. It stands in a Versailles garden, elegant and refined – a marble vase with gilding, a French park and a marble statue in the background. The composition takes the form typical of such canvases: the figure of the person portrayed in the center acquires significance and monumentality, thanks to the lowered horizon line. The splendor of the costume and surroundings, the romantically rebellious sky in the background give the portrait a spirit of theatricality, art play.

Veland Schmid, biographer de Chirico, explains the artist’s passion for dressing in preparation for self-portraits: "He puts on the costume of a nobleman or condottier and puts himself in different eras. He covers his face with a wax or even a stone mask, conquers his melancholy, an oppressed state of mind, pushes all personal sensations to the background. For him, only the outfits are important, their color and texture, in a word – painting. The artist seems to compete with the masters of those eras in whose entourage he places his double, eras in which he would like to visit"."