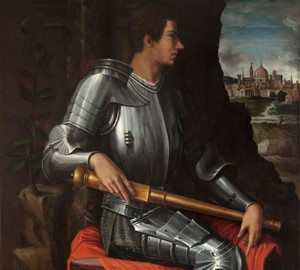 Portrait of Alessandro Medici – Giorgio Vasari. 1534. Oil on canvas
In a portrait of his own patron Alessandro Medici, Vasari portrayed a knight, the real lord and patron of Florence. This is clearly evidenced by the golden rod in the hands of the baron and the panorama of the town in the distance. In fact, Alessandro was distinguished by an infamous character, licentiousness and was a bad ruler, for which he was soon killed.

The painting reflects all the main trends of mannerism – a strange pose, in which the duke’s body is turned half-face to the viewer, and his head is in profile, a complex combined background, a powerful chair on the lion’s legs, floral and decorative elements of the background.

The duke’s figure is highlighted in a cloak with a scarlet lining on which he sits. Bulky armor makes the body of a very young Alessandro more massive and solid, and his profile with a large nose and lips, dark finely curly hair emphasizes his nickname – Moor. It is believed that his mother was a black woman who served in the palace.

The master perfectly managed the image of the blackened metal of knightly armor. They seem noticeably massive, smooth and shiny. A helmet with a visor down is at the Duke’s chair, facing the other way, as if he could see everything around him at once. The hands of a young man are very impressive – they have a beautiful shape and long thin fingers."