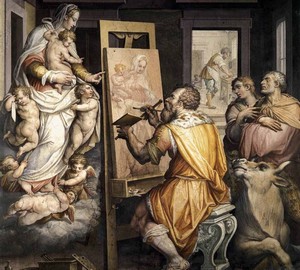 It is believed that the evangelist Luke was an artist, so many painters were members of the guild of St. Luke. In the picture, in the guise of a saint, the master depicts himself, who is painting the Most Holy Theotokos from nature. Behind sitting on an elegant carved stool lies a huge bull – this animal in its winged guise was a symbol of the evangelist Luke. Each of the evangelists had its own symbol, all of which were called Tetramorph (angel, lion, eagle and bull, or bull).

In this complex and almost the whole mysterious picture, the sublime and the earthly are united – saints and gods, also ordinary people, such as the artist’s apprentice, rubbing paints in the next room and visible to the viewer through the open door. As was customary in the manner of writing Mannerism, the poses of the figures are complex, even elaborate, they use a lot of drapery and rich decoration materials, the colors are rich, but not intense, a little “dusted”, noble and restrained."