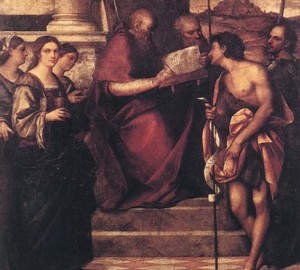 St. John Chrysostom – Sebastiano del Piombo. Wood, oil. 200 x 165 cm
The painting is located at the altar of the Church of St. John Chrysostom in Venice, was commissioned by Katerina Kantarini. This work relates to a premature, Venetian period of the artist. At this time, Sebastiano was influenced by his own teachers Giorgione and Giovanni Bellini. According to Vasari, many ignorant people in painting thought that this was the work of Giorgione.

The muffled spectrum of the picture makes a peaceful, sublime mood. The composition is built harmoniously. The figures of the saints are static and immediately full of sheltered movement, each carries its own message to the viewer. Monumentality and grandeur to the plot are added by ancient architecture. At the same time, the lyrical landscape in the background, the smoothness of the lines in the image of the saints, the deepest colors assign to the work of spirituality and life.

John Chrysostom – Archbishop of Constantinople, preacher, church writer, depicted without the attributes of his own highest rank. He sits in ordinary clothes on the steps of an ancient building with a large book in his hands, writes and reads aloud his works. Placing John Chrysostom on the porch of an amazing building (temple), the painter, perhaps, wanted to show that the saint is the founder, the main ideologist of the Christian church.

The saints surrounding John are divided into three groups. Behind his shoulder is the head of John the Theologian, who wrote one of the Gospels, the Apocalypse and several epistles to Christians. The apostle thoughtfully hears John Chrysostom, with his holy power helping the bishop complete his work.

On the left, the artist placed a group of three women. This is St. Catherine, Mary Magdalene and St. Lucia. The figure of Mary Magdalene immediately attracts attention. Beautiful woman with her hair holds an incense vessel. Her face is turned to the viewer, at which she looks with a piercing gaze, as if calling to bow down in repentant prayer. Saint Lucia – the patroness of the blind – is depicted with her eyes closed, in her hands she holds her attribute – a dish. The woman bowed, listening to the words of the great old man. St. Catherine readily follows them.

Right in the foreground is John the Baptist in camel-hair clothes, leaning on a reed cross. The prophet who foretold the appearance of Christ attentively hears John Chrysostom. Behind him, in knightly armor and with a spear in his hand, stands the holy great martyr Theodore Tiron. Before the relics of St. Mark were transferred to Venice, he was considered the main patron of the city."