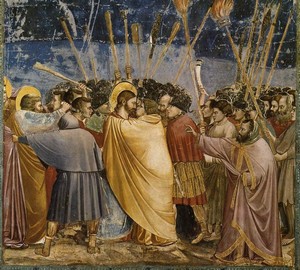 Kiss of Judas (Taking Christ into custody) – Giotto di Bondone. 1305. Fresco, tempera.
This mural is considered one of the best works of Giotto. In it, he manifested himself not only as a talented painter, but also as an innovator who changed the art, which was static and devoid of sensuality, by adding space, volume and expression to it.

To create the fresco, a textbook biblical plot was used, until Giotto quite often met in art, especially monumental. This is the moment of the embodiment of Judas’ betrayal. According to the Bible, one of Christ’s disciples, his apostle, threw him for 30 silver coins. In order for the guards to be able to capture Jesus, Judas had to separate him from the crowd of supporters, going up to him after supper and hugging Teacher.

The kiss of Judas is an image of the extreme degree of the fall of man, a symbol of the direct clash of good and evil. The peaceful preacher Christ is cruelly betrayed by his beloved disciple, and not out of ideological disagreements, but only for pathetic money.

The mural is a multi-figure composition, decorated in a very beautiful, shining color scheme. On a dark blue background in very lively poses three groups of people are placed. In the center is Christ and the treacherous Judas, on the one hand, the guards and the high priest advancing by the wall, and on the other, the apostles, who, in anger, waved a knife at the traitor Saint Peter. According to the Bible, he was a fisherman and he always carried a knife with him. In the fresco, only he and Jesus are highlighted with golden nimbuses.

For the first time, Giotto’s figures of biblical characters did not find standard faces, but recognizable, characteristic and lively faces. Christ is a fair-haired and attractive young man, and Judas is disgusting not only with his deed, but also with his appearance, guards with an angry expression on their faces and excited disciples – all this is completely unusual for the painting of previous periods.

The figures on the fresco have a volume, they no longer hang in the air, as on the icons, and the folds of their robes emphasize the shapes of bodies and movements. In general, the whole image seems very dynamic and expressive."