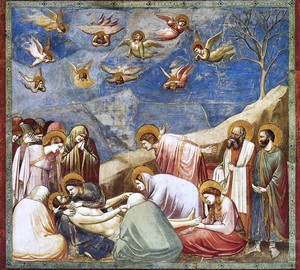 Mourning of Christ – Giotto di Bondone. 1306. Fresco, tempera.
This fresco enters the cycle of murals of the Scrovegni chapel, which has glorified and preserved the name of the artist for centuries. The master brought to his work something that was so lacking in the painting of past eras – emotions are alive. It is enough to look at the fresco to immediately see its sharp difference from the works of church painting, made according to the Byzantine canons. There is no static and schematic in the image. Before us are people alive, any of whom grieve differently.

The figure of Christ is striking – it really is a dead body, and not those chrysalis that were previously depicted. And the point is not in his mortal pallor, but in how the painter conveyed his lifelessness – relaxed, limp hands, thrown back head, outstretched legs, absent expression. And in contrast – the stormy emotions of the apostles surrounding him – the hands of the young apostle John, beloved disciple of Jesus, thrown back in despair, the restrained experiences of Joseph of Arimathea, who redeemed the body of Christ after the execution, and Nicodemus, who helped in his burial.

The artist managed to convey despair even with images of grieving women sitting with their backs to the audience. Although they are completely covered by cloaks, their figures hunched in despair reflect genuine suffering.

Gathered around the still body of the myrrh-bearing wife, this is a real achievement in art. They are captured in different, but very natural and lively poses, and their clothes are folded with real bodies, rather than illusory ethereal models. They have expressive and recognizable faces with individuality, and not differing in iconographic sketchiness.

In this fresco, Giotto was far ahead of his time, introducing emotions, movements, real human experiences into the monumental church painting. Pictures have ceased to be standard icons, but have become a real reflection of reality – real or imagined."