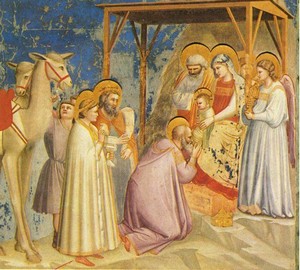 Adoration of the Magi – Giotto di Bondone. 1304-1306. Fresco of the chapel del Arena. 200 x 185 cm.
As a motive for the fresco, one of the most frequently used fragments of the biblical narrative is used – the worship of 3 magicians to baby Jesus. The image was made on a juicy blue background, symbolizing the night sky, on which a star of Bethlehem glows, showing the magi the way to the newborn Messiah.

The holy family with Jesus is located under a tree canopy, behind which the highest mountain is depicted. This is the one in which the cave was located, where the son of God was born. Next to the canopy is a winged angel in a lush white robe with gold trim. In his hands are the gifts presented by one of the Magi.

The elderly sorcerer knelt, kissing the edge of the jibber of Jesus. A swaddled baby is offered to him by the Virgin Mary, sitting on an eminence, on the step of which lies a golden crown – a symbol of the Kingdom of Heaven.

The remaining two wise men are waiting in line, standing behind the knee-old elder. They hold in their hands the precious offerings that they prepared as a sign of Jesus’ salutation and recognition of his divine origin. They wear long, rich clothes, flowing in large expressive folds.

Behind the backs of the standing Magi, in a very natural and lively pose, a servant is depicted holding two mounted animals, judging by the height and length of the legs that are supposed to represent camels. They have a red harness and saddles on them, and the poses are very natural, which used to be extremely rare in religious images.

Increased attention is worthy of the image of stepped rocks on which the entire group of characters is located. They are realistic, with shadows and the necessary volume. Despite the past 700-odd years, the fresco is well preserved and allows you to appreciate not only the high skill of the artist, but also the wealth of colors used."