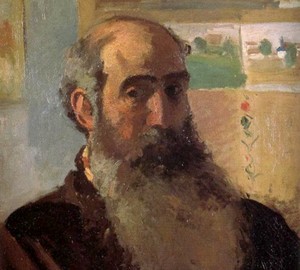 Pissarro made his own most famous self-portrait in 1873. Other, least known, painted in oil, also came to us, as well as a small number of self-portraits, executed in pencil, ink or using the technique of etching. All these works belong to the last period of the artist.

"Self portrait" 1873 year – the only really popular work in this genre. The artist was then 40 three years old. A striking bald patina, pointed features, grayish hair and a beard make him older. Even then, he recalls with his appearance the biblical prophet, which, in general, is noticed by everyone who meets with Pissarro at that time, jokingly calling him something "Moses"then "Abraham".

In 1873, Pissarro lives in Pontoise and is constantly in the company of Cezanne. This communication was one of the most fruitful and valuable for 19th-century French painting. The result of such a tight friendship between the two masters were countless portraits in which the painters depicted each other. IN "Self portrait"and specifically in the unhurried thoroughness of his composition, the influence of Cezanne is very noticeable. The composition of the picture is carefully thought out, and the dark torso only emphasizes the power of the impression made. Pissarro managed to create the illusion of a uniform block, an unshakable rock.

It should be remembered that 1873 is the period preceding the First Exhibition of the Impressionists. IN "Self portrait" Pissarro’s new creative style is emerging. Two landscapes depicted in the background are shown schematically, but their content and form of expression resemble paintings of the Impressionists. And Pissarro writes his face because he would write some kind of landscape. Here there is the same play of light and color, the same spontaneity and barely marked depth – features characteristic of almost all landscapes of the artist.

The typical classical pose of a person in the picture evokes memories of the old traditions of painting (the works of Chardin (1699-1779) and Poussin (1594-1665), which Pissarro and Cezanne always admired.

Chardin’s influence is particularly noticeable in the last self-portrait of Pissarro, written first in 1903. Hat, double-rimmed glasses: all this is just an ironic echo, a kind of mirror of the well-known self-portrait of Chardin, on which he imprinted himself in a pince-nez and an odd hat with a green visor."