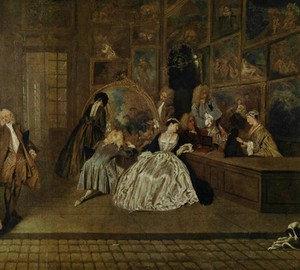 Sign of the Gersin’s shop – Antoine Watteau. 1720. Oil on canvas, 163×306 cm
The symbol of the French Rococo, the master of idealized plots with his characteristic grace, chivalry, theatricality and secularism, the man who so honestly glorifies the satisfaction of being, Antoine Watteau was assigned a short life – only 36 years. His parting work was The Sign of the Gersen Shop.

A year before the creation of his last work, Watteau lived and worked in London, where he enjoyed great recognition and popularity. But the gentle audience could not save the fragile organism of the painter from the dangerous terrible climate of Misty Albion, and very soon he would not be. In the meantime, Watteau returns to Paris, where he stops at Gersen, a companion who traded in works of art.

Gersen’s shop was called sonorously and pompously – “The Great Monarch”. Watteau invited a friend to sign for his delightful shop. The result was a sign-picture, which was destined to survive the shop itself, and Gersen, and Watteau, forever entering the world fund of fine art.

The canvas depicts a spacious bench hung from the ceiling with paintings in heavy frames. With all this, Watteau did not fail to throw a semantic bridge from the name of the shop – “The Great Monarch” to the image itself. An attentive viewer may notice that on the left side of the picture, the workers put a portrait of Louis XIV in a large box. Also with this element, Antoine Watteau paid tribute to the Great Sun King, during whose reign France experienced the greatest flowering of art. By the time the Lavka was being written, the reign of Louis XIV had already ended, and his son ascended the throne.

The amazing picture seems to make it possible to “raise” the wall and look into the “holy of holies” of the store, where life is in full swing and everyone is doing their daily business, not paying attention to curious spectators or casual passers-by."