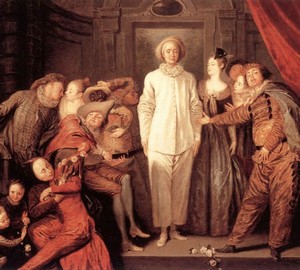 Italian comedians – Jean Antoine Watteau. Around 1720. Oil on canvas. 63.8×76.2
The artistic legacy of Watteau, the creator of the genre of “gallant holidays”, is unrealistic to imagine without theatrical scenes with characters from the comedy del arte. Perhaps this painting is one of the latest compositions with actors performed by the painter. She is a little overloaded with figures; she does not feel the strict restraint of Gilles and Metseten. But this work is to some extent a group portrait of comedians.

In the center of the small stage is Gilles, at whose feet lies a garland of roses. It feels like this big-bosomed and nosed hero is real, he just threw off the innocent expression of his own character and showed the public a natural, tired face. He attracts the attention of his bandmates; the hand of the actor playing the role of Harlequin also shows him. Around Gilles, all the action is being built, other artists are crowding together. There are fifteen figures in the picture representing all the masks – here are Metseten, and Colombina, and Pantalone.

This is a solemn and farewell encore of comedians whom Watteau summoned from the depths of his memories to show grateful art lovers and say goodbye to them forever. There is something infinitely sad in a close group of people trying to seem cheerful. As if they share the sadness experienced by the viewer, who knows that before him is the last theatrical composition of the master."