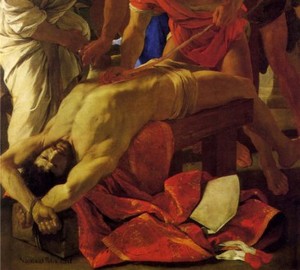 Martyrdom of St. Erasmus – Nicolas Poussin. 1600-1604. Canvas, oil. 320×186
French painter, one of the founders of classicism in European painting, Nikola Poussin, experienced a craving for ancient and modern Italian art, in 1624 he moved to Rome. In the midst of the works made by him here, there was a picture on the plot from the lives of St. Erasmus, Bishop of Formia, written for the altar, placed in the right transept of St. Peter’s Roman Cathedral.

Poussin depicted a terrible scene: the executioners are pulling the insides of the protagonist, winding them on a winch. The densified composition makes the tension exaggerated, which is amplified by the emotions and gestures of the characters. Erasmus’s face is distorted by flour, the priest impulsively points to the statue of Hercules, in other words a pagan idol, trying to explain to the saint for disrespect to whom he suffers. The tormentors are furious and, at the same time, they carry out their work competently. But angels soar in the sky above Erasmus, carrying a laurel wreath, usually crowning those who have earned fame for their deeds, and the palm branch is a symbol of triumph."