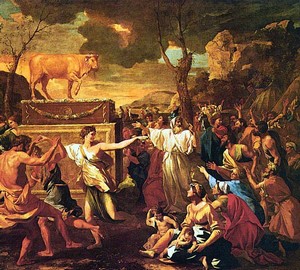 “Adoration of the Golden Calf” was conceived by the artist as a pair of paintings for the “Crossing the Dark Sea” (1633-1634, Victoria State Gallery, Melbourne). Both were written for Amadeo dal Pozzo, cousin Cassiano dal Pozzo – the head Roman patron of the artist. Until 1945, the work hung together, until the State Gallery acquired a later one.

Like other paintings by Poussin, “Golden calf worship“Is filled with many characters, they are all involved in the action, and the composition is a single whole. In this, Poussin was an unsurpassed master and used his findings fully, embodying them in different compositions and contexts. Discovering such parallels is very exciting. So, the artist dancing a group in front of a calf borrowed from the earlier work “Bacchanalia in front of a statue of Bacchus” (1632-1633, National Gallery, London), turning it … 180 degrees! It is not known whether the painter thought that the viewer would not notice this, or, on the contrary, counted on his insight?"