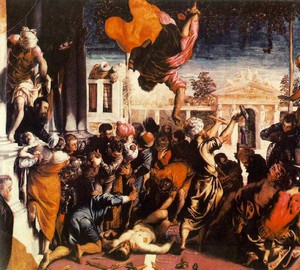 The magic of St. Mark is Jacopo Tintoretto. 1547-1548. Canvas, oil. 416×544
Artworks dedicated to the patron of Venice were often commissioned by local artists. Scuola Grande di San Marco, a rich and powerful association of spice merchants, also decorated its premises with scenes from the life of the saint. For her, thirty-year-old Tintoretto performed the song “The miracle of St. Mark”, having won his first indisputable success. By the time the canvas was created, significant changes had taken place in Venetian painting. Tintoretto, a younger contemporary of Giorgione, Titian, and the great masters of the High Renaissance of Central Italy, not only learned their lessons (“Michelangelo’s drawing, the color of Titian”), but also developed in his work a tension of passions and forms that literally blows up the space of his picturesque worlds.

It was in the “Miracle of St. Mark” (the apostle frees the Christian slave from torture) that the researchers discover the first triumphal manifestation of Tintoretto’s synthetic manner, independent of any influences. With all this, it was noted that the reclining figure in the red turban on the right side is a quote from Michelangelo’s preparatory drawing for the figure on the sarcophagus of Lorenzo Medici, and the overall composition resembles Raphael’s “Sacrifice in Lystra” cardboard, however, compared to the latter, it is filled with imperious dynamism .

As for the peculiarities of the picturesque structure of the canvas, the restless play of unnatural light, with which the artist creates a wonderful atmosphere, is especially noticeable with a juicy and bold palette of character costumes. However, the colorfulness here least allows bodily sensuality, still preserved by forms, it makes you see images of seemingly mystical vision. The master becomes one of the first forerunners of the art of counter-reformation."