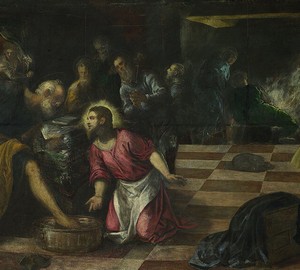 Christ washes the feet of his disciples – Tintoretto. 1575-1580. Canvas, oil. 204 x 410 cm
A horizontally elongated canvas on a traditional biblical theme is made in the mannerism appropriate for this artist. It is a complex multi-figure composition with an emphasized perspective, which is transmitted using the geometric pattern of the floor tiles.

The plot of the picture is an illustration of the extreme humility of Jesus Christ. In the Bible, this ancient rite is described exclusively in the Gospel of John. This event took place at first the legendary Last Supper, after which Jesus was captured by Roman soldiers and doomed to be crucified.

The giant-sized canvas depicts many figures in various complex poses and angles. They are in a spacious dark room, in the upper room, in which, according to the biblical story, the Last Supper took place. The side figures are literally drowning in the shade, they are all depicted in dark, muted colors, and the faces of the characters are illuminated by the warm golden light of the fire from the hearth. This color scheme perfectly emphasizes the red and white robe of Jesus Christ.

The importance of his character is declared not only by the special color of his clothes, but also by his central location. He kneels in the middle of the room, in front of him sits one of his students. On the floor is a tub of water, in which a God-man washes the apostles’ feet. Around the head of Christ is a bright golden radiance.

An embarrassed elderly follower of the teachings of Christ leans toward a kneeling teacher, perplexed, for which he was given such high honor. But for Jesus himself, this is a way to show that in his spiritual family everyone is equal, there are neither subordinates, nor superiors.

Each of the figures on the canvas has its own outlines, so people’s poses seem dynamic, and the picture itself loses its static. Despite the mannerism and unnaturalness of gestures, everything that happens looks monumental and impressive."