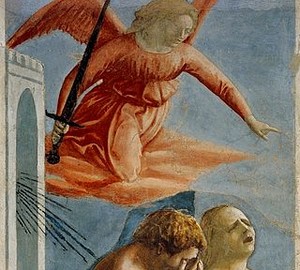 Expulsion from Paradise – Masaccio. 1427. The fresco.
The person who first saw this fresco for the first time in his life is unlikely to attribute it to the 15th century, the execution style itself looks very modern. The expressive style of writing, colorful color spots and expressive figures with the correct outlines and body structure, send us faster to modern tests in the field of art than to the era of the early Renaissance. Nevertheless, this is so – the fresco was painted during the complete reign of “ethereal” Gothic, when nudity was considered shameful and embarrassingly covered with draperies or traditional “fig leaves”.

The fresco of the master is the embodiment of undisguised grief that suddenly befell two people who previously did not know any troubles. The reflection of the biblical tradition, “Expulsion from Paradise” depicts exactly the moment when Adam and Eve were expelled from Eden. Paradise life for them has ended, they are cursed and rejected by God, and ahead of them only a life full of labor and hardship awaits them.

It is not surprising that Eve literally yells from grief and a sense of her own powerlessness. Her image is most impressive, since the artist literally with a few strokes managed to reflect a lot of expressive and strong human feelings – pain, grief, suffering, perplexity, doubts about his future, shame. In addition to these feelings, Eve for the first time in her life felt the shame of her own nudity, which in Eden did not bother her at all. She painfully tries to cover herself with her hands, suffering from the fact that she became the cause, albeit indirect, of the fall and exile.

Adam is not ashamed of his nakedness, shame and grief covering his face with his hands. Sobs shake his body, making him hunch over a young and strong man. Although the plot itself involves a naked image of Adam and Eve, the artist’s courage in detailed and realistic images of people’s bodies did not appeal to blinded churchmen. As in most similar cases, the images were tried with false bashfulness to cover with traditional green branches.

Due to the simplicity of the image and the almost complete absence of decor in the background, all the attention of the person looking at the fresco is concentrated precisely on three figures – Adam, Eve and the angel with the punishing sword in his hands, depicted hovering above them. It becomes clear that they ordered the way back – the gates of paradise are tightly closed, and the angel guarding them unequivocally raised his sword high above him. The scarlet color of the dress of the angel gives particular anxiety to what is happening – this is an open threat and warning.

Amazing for such an early period of the Renaissance, the realism of the image of the bodies of people and the skill in reflecting strong emotions make one again regret that the master himself died at such a young age. Who knows, if he stayed to live, did not most of his famous contemporaries overshadow his skill?"