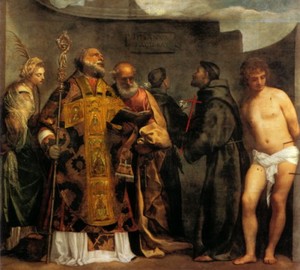 Madonna and Child with Saints (“Madonna dei Frari”) – Titian Vecellio. 1516-1520. Wood, tempera. 410×279
Made by Titian in the middle of life, when he became the first Venetian artist, this canvas is the prototype of his full-blooded, strong painting, marked by a rich color. It was written for the church of San Niccolb dei Frari in Lido, near Venice.

Madonna with Toddler on her knees and angels descends on the sides in a cloud to St. Catherine, Nicholas, Peter, Anthony, Francis and Sebastian. A vision visits them in a church with uncovered arches. Any of the participants in what is happening experiences the appearance of the Virgin with little Christ in their own way, but they are all connected by a deep sense of the solemnity of the moment. This feeling is reinforced by the fact that the saints, who either look up or contemplate the sky coming down to them with their inner eyes, seem to see themselves a little from below. All the characters were painted by the artist in a vivid and tangible way, so that people in the church believed in the reality of the depicted and were in a joyful and trembling state."