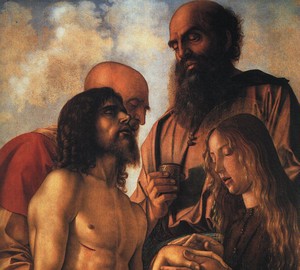 Mourning of Christ – Giovanni Bellini. 1473-1476. Wood, oil. 107×84
“Mourning of Christ” It was once part of the head altar painted by Bellini for the church of San Francesco in Pesaro. In the center of which was the composition “Coronation of the Madonna,” and at the edges – the smallest-sized scenes. A colorful board was placed at the top, hence, probably, the angle of the depicted: the figures are seen little from below.

In Venetian painting, Bellini completed the Premature, immediately opening the Highest Renaissance. He has already used alkyd paints intensively, and therefore the spectrum of his work is saturated, the colors are soft, and the outlines of the figures are not as rigid as in the paintings of other quattrocento artists. One of the innovations was that the main thing in Bellini was not the plot, not the picturesque solution, not the desire to describe in detail the visible and invisible worlds, like many of his contemporaries, but the mood. In the presented work, the gospel episode itself conveyed the feelings of the characters.

On the face The savior – a trace of suffering, the other participants in the scene are filled with deep sadness, expressed with restraint, since the main thing here is a huge love that fills everything in the picture: Christ, who atoned for the sins of people, and His followers to Him. Saint Joseph of Arimathea carefully supporting the dead body of Jesus, Saint Mary Magdalene, taking His hand with trembling tenderness, anoints her with peace from the vessel brought by Saint Nicodemus. The care of Joseph of Arimathea, behind which he hides his grief, echoes the stern and gentle appearance of Nicodemus, whose broad shoulders shade the fragility of Mary Magdalene. The tears with which this woman’s soul is overwhelmed are involuntarily compared with the torments endured by Christ, and the scale of His suffering becomes incomparable."