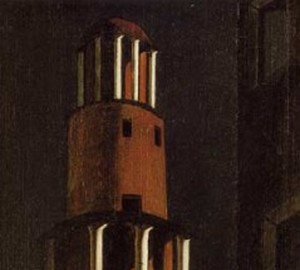 The charm that the painter experienced from the old and lovely Ferrara also affected here. In most cases, this image appears in the works of the period 1913-1915. This is the dominant, if not the only, theme of the whole series of paintings by George de Chirico, her big motive.

On the canvas, the master emphasizes the grandeur of the building, placing in the foreground a languid black building block. This array is contrasted with a slender, saturated terracotta-colored tower. The vertical lines of the white columns create the feeling of something colossal, almost endless. The cylindrical shape of the structure is inspired by the image of the Turin Tower of Mole Antonellian – the symbol of the city about which Nietzsche wrote: "This is the most ingenious structure of all erected in an all-consuming aspiration up. Nothing beats her – unless my "Zarathustra". Undoubtedly, de Chirico, developing the theme of the tower – a characteristic attribute of many cities – remembered the famous construction of the Eiffel. He was familiar with her images and on the canvases of Robert Delaunay. When in 1915 de Chirico created the last picture from this cycle, he brings in more massive geometric elements. The columns become almost invisible, thin and airy."