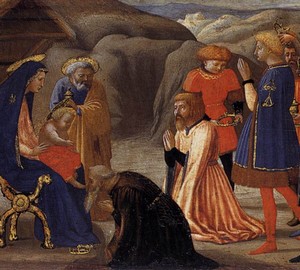 Adoration of the Magi – Masaccio. 1426. Wood species of poplar, tempera. 21 x 61 cm.
This picture is part of the Leaning Polyptych, which refers to the so-called predelle – the bottom row of images located under the main compositional parts. The Leaning Polyptych of Pisa is the only work of the artist that has an accurate dating, because official documents about the moment of its creation have been preserved. For some time the polyptych was considered lost, but at this moment most of it was found and stored in museums.

The elongated format of the predella allowed the master to successfully arrange a huge number of figures, creating very expressive images in a small area. The painting depicts a recognizable biblical motive when three wise men came to the newborn Jesus, predicting his birth. They found the birthplace of the coming Savior on the Star of Bethlehem.

The canvas depicts a long procession, which is lined up in front of the Virgin Mary with baby Jesus in her arms. It is immediately noticeable that this part of the polyptych differs from its upper fragments. What is in sight is the absence of a canonical golden background. The characters in the picture are painted against a mountainous landscape with dark mountains, behind which a narrow strip of blue sky with clouds is visible. This gives the work volume and perspective.

Masaccio’s contemporaries also admired the skill with which the horses are depicted in the picture. They stand in different positions, which again gives the picture a depth of space. In addition, each horse has an individuality and is depicted with excellent craftsmanship.

Numerous figures of people are dressed rather in the fashion of the early Renaissance than in the one that reigned one and a half thousand years before the birth of the artist. But this technique is characteristic not only of Masaccio and his contemporaries, and in other eras it was customary to “modernize” biblical motifs. I immediately want to note the exceptional ability of the master to correctly put human figures on the ground, because before him no one could do this. On most canvases to Masaccio, the figures seem to hover in the air, but with him they firmly rest their feet on the ground.

Each figure is depicted very carefully, neat folds of robes are carefully designed, depicting the figure and emphasizing it. There are many colors on the predelle, bright and rich, making a magnificent contrast with the gloomy mountains in the background and the dark barn symbolizing the manger where Christ was born and spent the first hours.

Saturated colors and expressive forms are also characteristic of the image of animals in stalls, especially of a lying cow, placed, like a horse, in a complex perspective. All these details reinforce the impression of active movement in the picture, for all its small size, giving the impression of a monumental work."