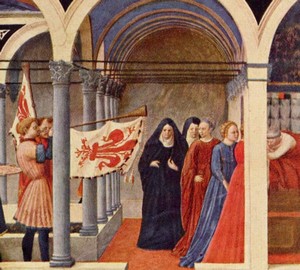 Christmas – Masaccio. The year of creation is unknown. The front of the Berlin Tondo. Wood, tempera. Width 56 cm.
This work is attributed to the brush of Masaccio, because it does not have a clear attribution. It is a round dish or tray, which received the name Tondo (from rotondo – round). This thing was presented as a gift to the ladies who had just given birth to a baby; it served the first meal for a woman in labor. Hence the choice of plot – Christmas. It is depicted on the front side of the dish, and on the other hand, the tondo is decorated with a symbolic image of a chubby angel, which in Italian tradition is called putto. He plays with a small dog.

Christmas is a complex multi-figure composition, including architectural details, masterfully built according to the principles of perspective. Despite its small size, the product looks monumental, and the image on it – voluminous. The biblical scene of the Nativity is postponed and the realities of Renaissance Italy, so the outfits of characters and the decor correspond to the time of creation of the work.

The picture is very colorful, beautiful, made with great skill. The figures of people are perfectly inscribed in the space of the room with columns and an open area, where the bed of the woman in labor is standing. It seems that with this small chamber thing, the artist was far ahead of his time."