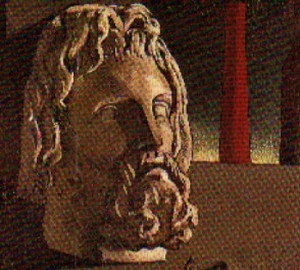 The philosopher’s walk is Giorgio de Chirico. 1914. 135×64
"Philosopher’s walk" – the work is innovative and sudden. De chirico depicts in perspective a pedestal on which is placed a plaster cast of Zeus’s head and two artichokes glittering with metal, the balance of which is about to be disturbed. It seems that objects are currently starting to roll off the surface. The composition is inscribed in an open space with a factory pipe in the background. "Philosopher’s walk" – one of the artist’s more complex metaphysical works.

The generous and stoic deity of the deity is contrasted here with artichokes – vegetables quite widespread in France and Italy. Summarizing, you can see the opposition of mineral, stone and plant elements. The master arranges objects in various combinations, using them simply as symbols. It’s hard to talk about any connections between the red pipe, the plaster head and two artichokes. Since in reality these items are not compatible. The play of light and shadow enhances the mystery of the scene.

Rounded forms of artichokes are found in many works by de Chirico of this period. Once, in 1913, the artist had an unusual dream: "The beauty of slender red pipes. Wall. Two iron artichokes stroke me …" With these iron-born artichokes born in dreams, de Chirico will further enrich his metaphorical palette."