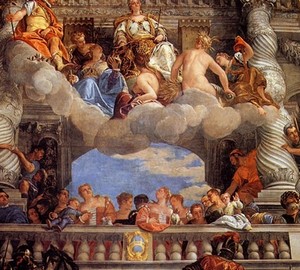 Triumph of Venice – Paolo Veronese. 1580-1585
There is some kind of dramatic fate in this – a genius who signed almost all of his works as Veronese, in other words, Veronets, reached its highest creative peak in Venice.

One of the best and most famous works of the painter is The Triumph of Venice, a huge oval-shaped painting that still adorns the ceiling of the Great Council Hall in the Doge’s Palace, adjacent to the works of Titian and Tintoretto.

The plot of the work is magnificent and pompous – the heavenly Angel crowns Venice. Around the main characters are figures of people allegorically pointing to all the virtues of the Republic of Venice, which ensure its prosperity and glory.

Two points are noteworthy in the work – the figure of an angel, which is depicted in a very difficult perspective, and the color scheme. The rich color scheme inherent in the Veronese style is still admirable in general. It is no coincidence that the Impressionists so sharply opposed themselves to past academic art, Veronese honored, not tire of drawing inspiration from his immortal works."