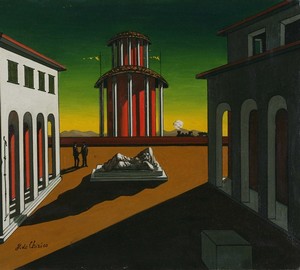 In the years 1912-1913, de Chirico makes several paintings that depict acceptable Italian city squares.. During this period, de Chirico tries to philosophically comprehend the surrounding reality, he is occupied with riddles, hidden, magic. The painter addresses the theme of antiquity to illustrate the principles of Nietzschean philosophy. In the desert squares, the master often depicts a sculpture of Ariadne – a sign of sadness and melancholy (this image was used by Nietzsche to symbolically convey some postulates of his own teachings). Strictly following the colorful European tradition, de Chirico at the same time brings new, personal elements to his canvases, as well as formal formal solutions inherent in him.

On the canvases, the sculpture of Ariadne is surrounded by deserted galleries. The arch motif, repeated many times and passing from picture to picture, is as integral to de Chirico’s system of symbols as the image of the tower. A train with a small train over which smoke is flowing hints at a plot collision of the myth of Ariadne.

In the picture "Place d’Italie: Melancholia" the composition is built using shadows from the architectural elements of the statue of Ariadne. A background saturated in tone is again emphasized by the presence of the train. This image symbolizes Theseus, whom Ariadne in love helped to get out of the Labyrinth with the help of a magic ball … Ariadne is inconsolable in her longing for her lover who has irrevocably left her. The horizontal strip of the outgoing daylight aggravates the sad mood of the composition. 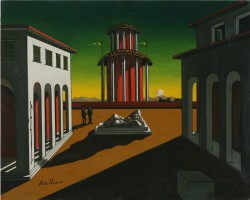 "Place d’italia", created a year later and stored in the Toronto Art Gallery, it differs from the previous work in a cheerful, bright color.

In the picture relating to the same period "Silent Statue of Ariadne" the play of light and shadow is actively used … The artist turns to new pictorial methods. Pointed corners, some schematic statues suggest the influence of Picasso. The composition itself is also new and unusual – the first plan is darkened, seemingly deliberately, artificially superimposed on the background. This shadow attracts the eye, and then it seems to slip into the depth of the picture to bright light."